Rick Seguso has been a full-time Floridian since 1989, living predominantly in Palm Beach County. After leaving West Palm Beach and most recently Tallahassee before settling in Tidewater in the late spring of 2021.

Artist, musician, actor, and singer/songwriter Rick Seguso was born in 1949 in Bronxville, New York into a family of artists and athletes.

Seguso’s father Arthur was a semi-professional baseball player. His uncle Richard is an accomplished artist. His grandfather Armand, a musician-turned-painter,  had a freelance career that spanned more than three decades as one of the premier poster artists of his day working for movie giants MGM, United Artist’s, and paramount.  Armand created iconic posters for many now classic films including “Gone With The Wind”, The Philadelphia Story”, “Kismet”, and “For Whom The Bell Tolls”, to name a few. He was a conduit for bringing MGM movie posters international acclaim for their incisive content and resale value.

After a youthful foray into the sports world, it’s not surprising that these seminal influences led Seguso into the creative life of a poet, actor, musician and most importantly – painter.

Armand’s early influence, Seguso’s own research and resourcefulness, and studies with internationally known artist Peter Olsen, helped Seguso further his resolve as a painter. Seguso’s work can be found in international collections and has been shown in leading galleries garnering critical recognition and rewards such as the Mary Hulitar award from the Society of the Four Arts in Palm Beach, Florida.

Equine art, floral and figurative work are a big part of Seguso’s work but at the heart of Rick’s eclectic subject matter are his moody and evocative portraits of musicians and scenic trees. Placing special on each character’s distinct and individual nature, Seguso captures these images and themes in bold and realistic paintings.

Inspired and influenced by the Old Masters and Post-Impressionists, Seguso’s technique is under-painting in grisaille, and most of his works include varying degrees of glazing, “a technique, often overlooked by modern day artists but an invaluable tool in creating jewel-like depth and style that is impossible to achieve by just mixing paint”, Seguso says.

Seguso’s colorful past includes working for legendary rocker Bruce Springsteen as his Road Manager and confidant in the mid 1970’s. He played a pivotal role in the musician’s rise to stardom.

Seguso is also a card-carrying member of the Screen Actors Guild since 1994 and has worked as a stage, film and TV actor.

A songwriter/poet for most of his life, Seguso has two CD’s of original songs entitled “Don’t Give Up” and “My Last Confession”. They were recorded in 2016 and 2020 respectively.  It is both amazing and inspiring that despite surviving a serious bout of throat cancer in 2000 and cervical fusion in 2020 he is very grateful to be able to continue to perform publicly. 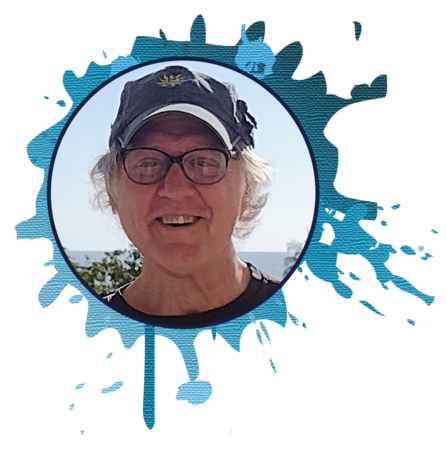